Published in the Java Developer group
In programming, it is important to plan your application's architecture correctly. Design patterns are an indispensable way to accomplish this. Today let's talk about proxies.

Why do you need a proxy?

This pattern helps solve problems associated with controlled access to an object. You may ask, "Why do we need controlled access?" Let's look at a couple of situations that will help you figure out what's what.

Imagine that we have a large project with a bunch of old code, where there is a class responsible for exporting reports from a database. The class works synchronously. That is, the whole system is idle while the database processes the request. On average, it takes 30 minutes to generate a report. Accordingly, the export process starts at 12:30 AM, and management receives the report in the morning. An audit revealed that it would be better to be able to immediately receive the report during normal business hours. The start time cannot be postponed, and the system cannot block while it waits for a response from the database. The solution is to change how the system works, generating and exporting the report on a separate thread. This solution will let the system work as usual, and management will receive fresh reports. However, there is a problem: the current code cannot be rewritten, since other parts of the system use its functionality. In this case, we can use the proxy pattern to introduce an intermediate proxy class that will receive requests to export reports, log the start time, and launch a separate thread. Once the report is generated, the thread terminates and everyone is happy.

A development team is creating an events website. To get data on new events, the team queries a third-party service. A special private library facilitates interaction with the service. During development, a problem is discovered: the third-party system updates its data once a day, but a request is sent to it every time a user refreshes a page. This creates a large number of requests, and the service stops responding. The solution is to cache the service's response and return the cached result to visitors as pages are reloaded, updating the cache as needed. In this case, the proxy design pattern is an excellent solution that does not change the existing functionality.

The principle behind the design pattern

To implement this pattern, you need to create a proxy class. It implements the interface of the service class, mimicking its behavior for client code. In this manner, the client interacts with a proxy instead of the real object. As a rule, all requests are passed on to the service class, but with additional actions before or after. Simply put, a proxy is a layer between client code and the target object. Consider the example of caching query results from an old and very slow hard disk. Suppose we're talking about a timetable for electric trains in some ancient app whose logic cannot be changed. A disk with an updated timetable is inserted every day at a fixed time. So, we have: The diagram is simple: 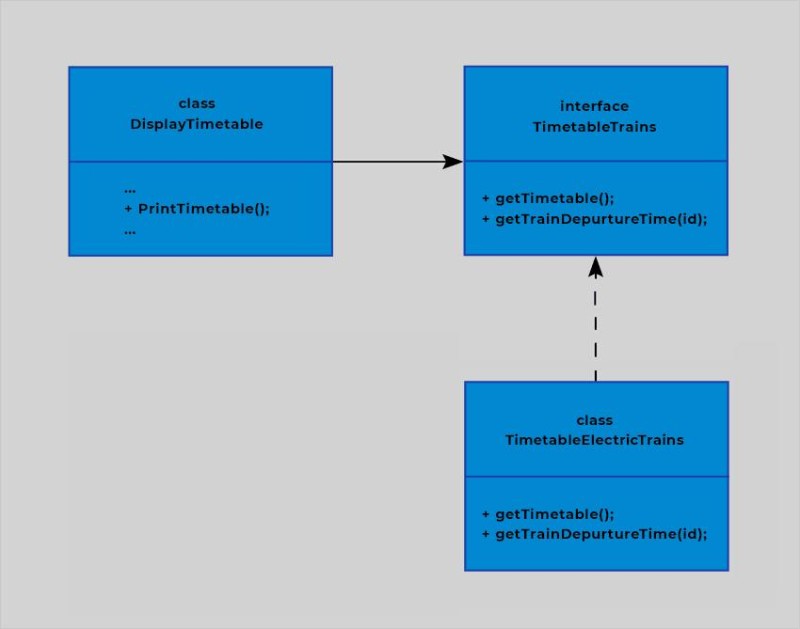 At present, with each call of the printTimetable() method, the ElectricTrainTimetable class accesses the disk, loads the data, and presents it to the client. The system functions okay, but it is very slow. As a result, the decision was made to increase system performance by adding a caching mechanism. This can be done using the proxy pattern: 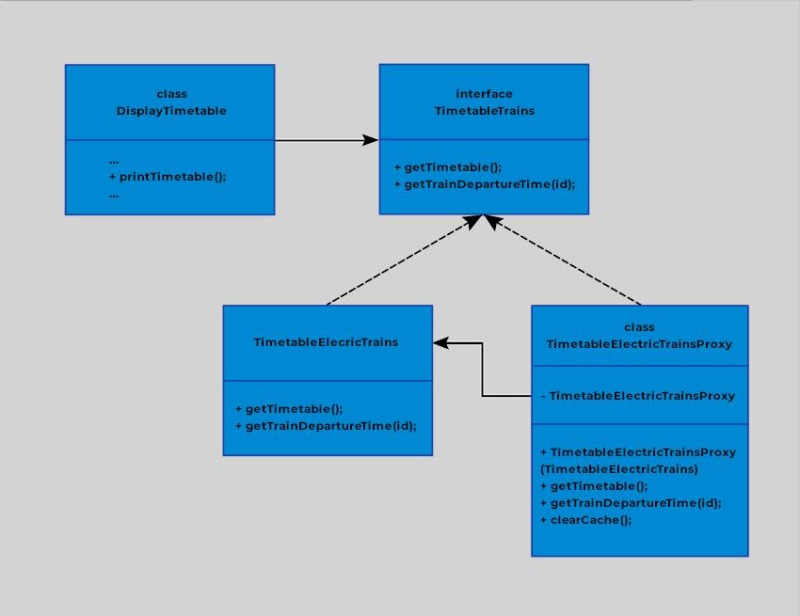 Thus, the TimetableDisplay class does not even notice that it is interacting with the ElectricTrainTimetableProxy class instead of the old class. The new implementation loads the timetable once a day. For repeat requests, it returns the previously loaded object from memory.

What tasks are best for a proxy?

Here are a few situations where this pattern will definitely come in handy: And there are also other use cases. Understanding the principle behind this pattern, you can identify situations where it can be applied successfully. At first glance, a proxy does the same thing as a facade, but that's not the case. A proxy has the same interface as the service object. Also, don't confuse this pattern with the decorator or Adapter patterns. A decorator provides an extended interface, and an adapter provides an alternative interface.

The proxy pattern in practice

Let's implement a system that reads train timetables from a hard disk: Here's the class that implements the main interface: Each time you get the train timetable, the program reads a file from disk. But that's only the beginning of our troubles. The entire file is read every time you get the timetable for even a single train! It's good that such code exists only in examples of what not to do :) Client class: Example file: Let's test it: Output: Now let's walk through the steps required to introduce our pattern:

Before we say goodbye, here is a helpful link

That's all for today! It wouldn't be a bad idea to return to the lessons and try out your new knowledge in practice :)
Comments (2)
TO VIEW ALL COMMENTS OR TO MAKE A COMMENT,
GO TO FULL VERSION
Arun Kumar Level 0, United States
13 June 2022
Proxy pattern increases the performance of the application by avoids creation or duplication of objects which might be complex and memory intensive. Proxy Design Pattern in Java
Lisa Level 41
29 January 2022
The UML diagram below 'I like the first excuse the best but for some reason I can't understand it is never shown.' has a problem. The type of TimetableElectricTrainProxies state is not TimetableElectricTrainProxy. It has to be TrainTimetable. And maybe you want to change the naming scheme inside the UML so it fits the one inside the text and code examples.
This website uses cookies to provide you with personalized service. By using this website, you agree to our use of cookies. If you require more details, please read our Terms and Policy.