Java Queue Interface and its implementations

Published in the Java Developer group
Here we are going to discuss the Java Queue interface. You’ll find out what Queue data structure is, how it is represented in Java, what methods are the most important for all queues. Also, what implementations of Queue are in Java language. After that, we take a closer look at the most important implementations and learn them with examples.

A Queue is a linear abstract data structure with the particular order of performing operations — First In First Out (FIFO). That means you can add an element (or enqueue, put in the queue) only at the end of the structure, and take an element (dequeue or remove from the queue) only from its beginning. You may imagine Queue data structure very easily. It seems like a queue or a line of customers in real life. The customer that came first, is going to be served first as well. If you have four people in line in McDonalds or elsewhere, the first to line up will be the first to get the store. If the new customer comes, he/she will be the 5th in line to get hamburgers. 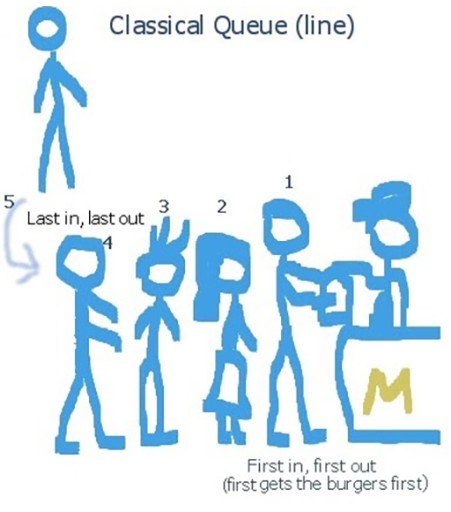 So, while working with a queue, new elements are added to the end, and if you want to get an element, it will be taken from the beginning. This is the main principle of classical queue data structure work.

Queue in Java is an interface. According to Oracle documentation, Queue interface has 2 superinterfaces, 4 different interfaces that inherit from the queue, and an extremely impressive list of classes. What does it mean? First of all, Java Queue is a part of the Collection Framework and implements Collection interface. So it supports all methods of Collection interface such as insertion, deletion and so on. Queue implements Iterable interface, that allows an object to be the target of the "for-each loop" statement.

The Queue declares a number of methods. As interface’s methods they should be represented in all classes that implement Queue. The most important Queue Methods, Java:

Queue interface is inherited by 4 subinterfaces – BlockingDeque<E>, BlockingQueue<E>, Deque<E>, TransferQueue<E>. You may divide them into 3 groups: Deques, Blocking Queues and Transfer Queues with BlockingDeque belonging to the two first. Let's take a glimpse at these groups.

Deque means Double-Ended Queue and supports addition or removal from either tail of the data as a queue (first-in-first-out/FIFO) or from the head as another popular data structure called stack (last-in-first-out/LIFO). Classes that implement Deque Interface: ArrayDeque, ConcurrentLinkedDeque, LinkedBlockingDeque, LinkedList.

There are many classes that implement Queue interface: The most popular implementations are LinkedList, ArrayBlockingQueue and PriorityQueue. Let’s look at them and do some examples for better understanding.

Class LinkedList in Java implements List and Deque interfaces. So, it is a combination of List and Deque, a two-way queue, that supports adding and removing elements from both sides. In Java LinkedList is doubly-linked List: every element of List calls Node and contains an object and references to two neighboring objects — the previous and the next.

You may say that LinkedList isn’t very effective in terms of using memory. That’s true, but this data structure can be useful in case of the insert and delete operations performance. However it happens only if you use iterators for them (in this case it occurs in constant time). Access operations by index are performed by searching from the beginning of the end (whichever is closer) to the desired element. However, don’t forget about additional costs for storing references between elements. So, LinkedList is the most popular queue implementation in Java. It is an implementation of List and Deque as well and it allows us to create a bidirectional queue consisting of any objects including null. LinkedList is a collection of elements.

LinkedList() without parameters is used to construct an empty list. LinkedList(Collection<? extends E> c) is for creating a list containing the elements of the specified collection, in order, they are returned by the collection's iterator.

PriorityQueue is not exactly the queue in FIFO general meaning. The elements of the priority queue are ordered according to their natural ordering, or by a Comparator provided at queue construction time, depending on which constructor is used. However it is not an order like it could be in linear structure such as list (from the biggest to the smallest or vice versa). A priority queue based on a priority min heap. Heap is a data structure based on binary tree. The priority of each parent is greater than the priorities of its children. A tree is called complete binary if each parent has no more than two children, and the filling of the levels goes from top to bottom (from the same level — from left to right). Binary heap reorganises itself every time a new element is added or removed from it. In case of min-heap, the smallest element goes to the root regardless of the order of its insertion. Priority queue based on this min-heap, so if we have a PriorityQueue of integers, its first element will be the smallest of these numbers. If you delete the root, the next smallest becomes a root.

It is important to understand that priority queues are based on binary heaps, so they do not keep elements in linear sorted order. Every way from the root to the leaf is ordered, but different ways from the root are not. That means you can get the minimal element of the queue very quickly. If you delete the head every time, you’ll print a sorted structure.

Internal data structure of ArrayBlockingQueue is based on a circular array to store elements. It is a typical queue (FIFO) in case new elements are inserted at the tail of the queue, and extraction operations return an element from the head of the queue.Once created queue capacity cannot be changed. Attempts to insert (put) an element into a full queue lead to blocking the flow; trying to take an element from an empty queue also blocks the thread. As we said before, this array is circular. That means that the first and the last elements of the array are treated logically adjacent. The queue advances the indices of the head and tail elements every time you put the elemento into the queue or remove it from the queue. If some index advances the last element of the array, it restarts from 0. Hence, the queue doesn’t have to shift all the elements in case of the head removing (as in usual array). However, in case of removing an element from the middle (using Iterator.remove), the elements are shifted. ArrayBlockingQueue supports an additional fairness policy with fair parameter in the constructor to order the work of waiting flows of producers (inserting elements) and consumers (extracting elements). By default, the order is not guaranteed. However if the queue is created with "fair == true", the implementation of the ArrayBlockingQueue class provides thread access in FIFO order. Equity typically reduces bandwidth, but also reduces volatility and prevents running out of resources.

Here we’ve got the BlockingQueueExample example. We create a queue of the ArrayBlockingQueue with a capacity of one element and a fair flag. Two threads are started. The first of them, Producer thread, queues messages from the messages array using the put method. The second one, Consumer, thread reads elements from the queue using take method and displays them in the console. The order of elements is the natural one for the queue. The output is the queue in natural order; the first two elements appear with a delay.

Oleksandr Miadelets
Head of Developers Team at CodeGym
Oleksandr became interested in programming at school, and he wrote games. Later, this hobby grew into professional development. Af ... [Read full bio]
Comments (1)
TO VIEW ALL COMMENTS OR TO MAKE A COMMENT,
GO TO FULL VERSION
Andrei Level 41
13 January 2021
Good, tough lesson, but quite a few grammatical errors which sometimes make the article difficult to understand. Could use a makeover. Nice, anyway.
This website uses cookies to provide you with personalized service. By using this website, you agree to our use of cookies. If you require more details, please read our Terms and Policy.