Part 1. What you need to know before learning Spring and JavaEE

Published in the Java Developer group
If you've already finished (or are close to) learning Java SE, then it's time to think about your next steps in conquering the profession of a Java developer.

On the one hand, you already have a good understanding of Java: you know how to work with an IDE, write programs, and much more. But what should you do next with your programs? How do you make them cooler still and "unleash them on the world"? It's becoming obvious that it is time to take up the study of enterprise technologies. And now the fun begins. It doesn't matter which technology stack you decide to start with. Whether it is JavaEE or Spring, you are likely to come across a ton of things that are far, far beyond your comprehension. Between Java basics and advanced technologies there remains an intermediate step in knowledge that must be taken in order to retain what remains of your self-control and self-confidence as you read voluminous documentation. Therefore, the purpose of this series of articles is to give you the minimum theoretical knowledge necessary for your further study of JavaEE or Spring. This material is divided into 7 parts:

Let's start with what matters most by talking about what every social network, web service and web app, instant messenger and simple website is built on — the network ( in the context of this series of articles, the term "network" means the Internet). The network consists of a huge number of computers: they are interconnected and able to communicate. It is important to understand how they do this, because web applications send information from one computer to another.

The Open Systems Interconnection (OSI) model creates a tiered approach to building a network. It clearly shows how and at what layer entities of the same network can interact with each other. In all, this model contains 7 layers: Breaking the model into layers of abstraction allows developers working on the transport layer, for example, to not have to think about implementation details at the level of the network and session layers. This approach is also used in programming. Let's consider all the layers of the OSI model, and determine which ones are of interest to us: 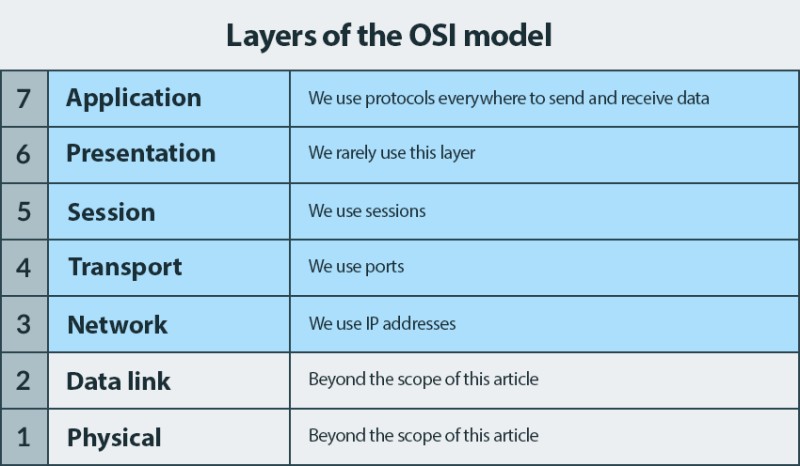 We don't need to know how every layer of the model works. The main thing is to understand the principles behind the operation of the elements that we will have to work with when writing web applications, namely: When we visit an online store, for example, we indicate its address and port. Upon our first visit, a session is created. The store can record information in the session. For example, the store might save information about items that we left in the shopping cart. If we close the tab with the online store and then go back into it later, our items will still be in the cart because they are saved in the session. Of course, all the information that we receive from the store we receive via the HTTP/HTTPS protocol, and our browser knows how to process it. You may object, saying that you never entered the address and port in the browser, and you would be partly right. What you did do was enter the domain name, which was converted by a DNS server. Let's take a better look at what's what here.

As we have already learned, each network user has a unique address. If we're talking about the application, then its unique address will be IPv4-address:port. If you know this address, you can directly access the application. Imagine that we wrote a web application that displays the average air temperature in all countries in real time. We deployed it on a server with the address 226.69.237.119, on port 8080. In order to be able to receive information from us, the user must enter 5 numbers in the browser: 226.69.237.119:8080. People don't like to memorize sets of numbers: many of us can't remember more than two phone numbers. That's why the Domain Name System was invented. We can create an "alias" for our address, for example, world-temperature.com. Instead of looking for us using an address consisting of five difficult-to-remember numbers, the user can enter our domain name in the address bar of the browser. There are DNS servers that map domain names to real addresses. For example, when a user enters codegym.cc in a browser, her request is sent to a DNS server, which converts it into the actual address. 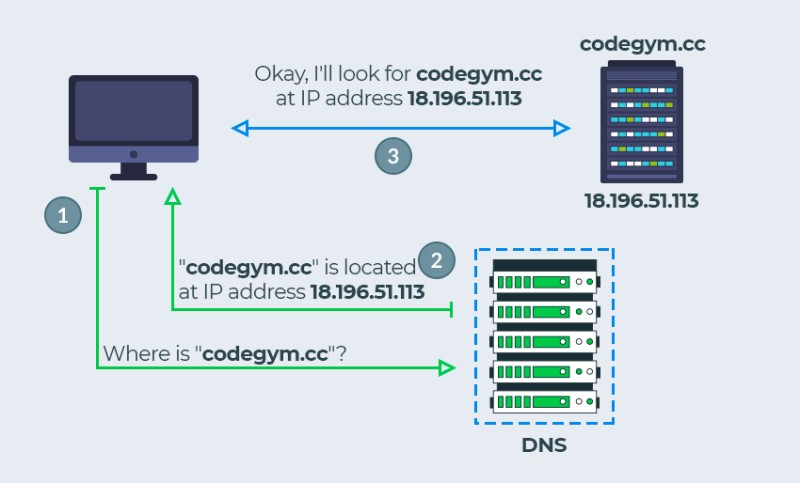 This is important for us to understand, because our applications will call remote services both by domain names and by real addresses. We need to understand that in either case the services are the same. That's it for now! In this article, we looked at the basics of networking, which will come in handy as you begin to learn web programming. Next time we'll look at what a client-server architecture is and why it is so important to understand. Part 2. Let's talk a bit about software architecture Part 3. HTTP/HTTPS Part 4. The basics of Maven Part 5. Servlets and the Java Servlet API. Writing a simple web application Part 6. Servlet containers Part 7. Introducing the MVC (Model-View-Controller) pattern
Comments (1)
TO VIEW ALL COMMENTS OR TO MAKE A COMMENT,
GO TO FULL VERSION
Andrei Level 41
6 August 2021
Nice article, thanks!
This website uses cookies to provide you with personalized service. By using this website, you agree to our use of cookies. If you require more details, please read our Terms and Policy.