Part 4. The basics of Maven

Published in the Java Developer group
This material is part of the "Introduction to Enterprise Development" series. Previous articles:

Maven is a tool for managing and building projects — a Java programmer's helpful assistant. It makes life easier for developers at every stage of work: from creating the project structure and connecting the necessary libraries to deploying the product on the server. You'll have to use Maven when working with any framework. So, today let's take a look at its main functions and see how to use them.

This is the standard structure of a Maven project:Also pay attention to the file called pom.xml. This is the main file for managing Maven. The entire project description is contained here. There is not too much information at the moment, but we will add it now.

You may have come across the phrase "dependency manager". Maven knows how to manage dependencies. Thanks to Maven, you don't have to spend a lot of time searching the Internet for a required library, downloading it, and then connecting it to your project. Instead, you just add the required library to the list of dependencies in Maven.

Dependencies are specified in the dependencies node of the pom.xml file

Let's say you need the Apache Commons IO library in your project in order to simplify working with files. To add a library, we write five lines in pom.xml: Now your pom.xml file should look like this: After that, allow IntelliJ IDEA to import the dependency (a dialog should appear in the lower right corner). Now the library is ready to use: All subsequent dependencies must also be written inside the <dependencies> tag. You may be wondering how to find out the information about the library that you need to indicate inside the <dependency> tag. That's easy. Three parameters are always need to be set: "groupId", "artifactId" and "version". There are two ways to determine these parameters:

It's worthwhile for us to mention Maven repositories again, because we actually have two of them: a remote (central) repository and a local (on your computer) repository. All libraries that you add to your projects are saved in the local repository. When Maven adds a required dependency to a project, it first checks whether the library already exists in the local repository. It accesses the remote repository only if it does not find the library locally. As you can see, you can use Maven to add dependencies, but this isn't all it can do.

This capability may seem pointless to a beginner. Why do we need this if we have an IDE? Let me explain. First, the server where you have to build your application may have neither a development environment nor a graphical interface. Second, on large projects, Maven does a better job of building the project. So without further adieu, we'll consider the process of building an application using Maven.

The process of building an application is known a Maven project's life cycle, and it consists of phases. You can look at them in IDEA by clicking Maven > example > Lifecycle in the upper right corner: 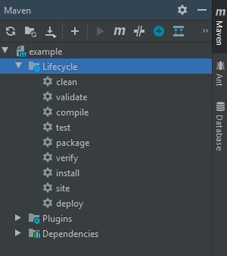 As you can see, there are 9 phases:All phases are performed sequentially: for example, the fourth phase cannot be started until phases 1-3 are completed. There are two ways to start a phase: Also, each phase has pre- and post-phases: for example, pre-deploy, post-deploy, pre-clean, post-clean, etc. but they are used quite rarely. In addition, each phase has goals. Standard goals are set by default. Additional goals are added by Maven plugins. Sometimes during a phase, you may need to perform additional functions. There are Maven plugins for this. A list of official plugins can be found on the Maven website. But you should know that there are many custom plugins that can be found on third-party websites. And of course, if some exotic need arises, you can always write a custom plug-in yourself.

To add a Maven plugin to the project, we need to add its description to the pom.xml file, using <build> and <plugins> tags, similar to how we added dependencies. For example, suppose we need a plugin to verify that we are using the latest version of all of our external libraries. After a bit of searching the Internet, you could find this plugin and instructions on how to use it. Let's set the groupId, artifactId and version. We'll indicate what goals the plugin must fulfill and at what phase. In our case, the dependency check in the current pom.xml is set to happen during the validate phase. Now our pom.xml file looks like this: We could continue to work on our project. But let's try changing the version of Apache Commons IO to 2.0 and building the project. We'll get Here we have a build error generated by the plugin. The error message states that we are using version 2.0 when version 2.6 is available. Basically, Maven is a very useful tool. Perhaps it will seem difficult to use at first, but practice! Create your projects using Maven, and after a while you will be very pleased with the end result. This article deliberately omitted a lot of details about Maven — we focused on the most essential. But there is no limit to improvement: you can read more about Maven on its official website. Part 5. Servlets and the Java Servlet API. Writing a simple web application Part 6. Servlet containers Part 7. Introducing the MVC (Model-View-Controller) pattern
Comments
TO VIEW ALL COMMENTS OR TO MAKE A COMMENT,
GO TO FULL VERSION
This website uses cookies to provide you with personalized service. By using this website, you agree to our use of cookies. If you require more details, please read our Terms and Policy.