Java Game Programming For Beginners: Where to Start

Published in the Random group
Java is widely used by indie game development companies and for creating mobile games. And it shouldn’t come as much of a surprise, given how versatile the language is and given its rich collection of open-source material. Many of the world’s top mobile games have been developed in Java. Minecraft, Mission Impossible III, and Asphalt 6 are just a few popular names you are probably familiar with. If you’re interested in understanding how and why you should study Java game programming, keep reading.

The Ins and Outs of Java Game Programming for Beginners

Java is easy-to-use, so a beginner can learn to create a range of programs and write reusable code, easily moving between computer systems as they do so. In comparison to programming languages like C++, Java is easier to write, debug, learn and compile. If you are looking into Java game programming for beginners, you’ll need to understand the basics of coding with this language first. And then, there’s a slew of different job opportunities that will open up to you. Knowing that you’ll be able to get a job in game development will make it easier to put your head down and study the language. Java game development salary: When it comes to salary, it’s rather your level (Junior, Middle, Senior), not exactly the job title matters. According to glassdoor, if you’re looking for an entry-level position as an entry level game programmer with zero experience (or close to this), you could earn around $65,433 a year. The more experienced you are, the higher your position will be, hence your salary will grow. The average salary for a game developer is $65,000 but that could go up to $103k/year.

Java Game Development For Dummies: Where Do I Start?

As an application layer programming language, Java isn’t hard to learn. You don’t need programming experience to start learning how to code with Java, it is well-structured and logical, so it is great for beginners. We have outlined a Java game development for dummies learning plan to help you on your way. 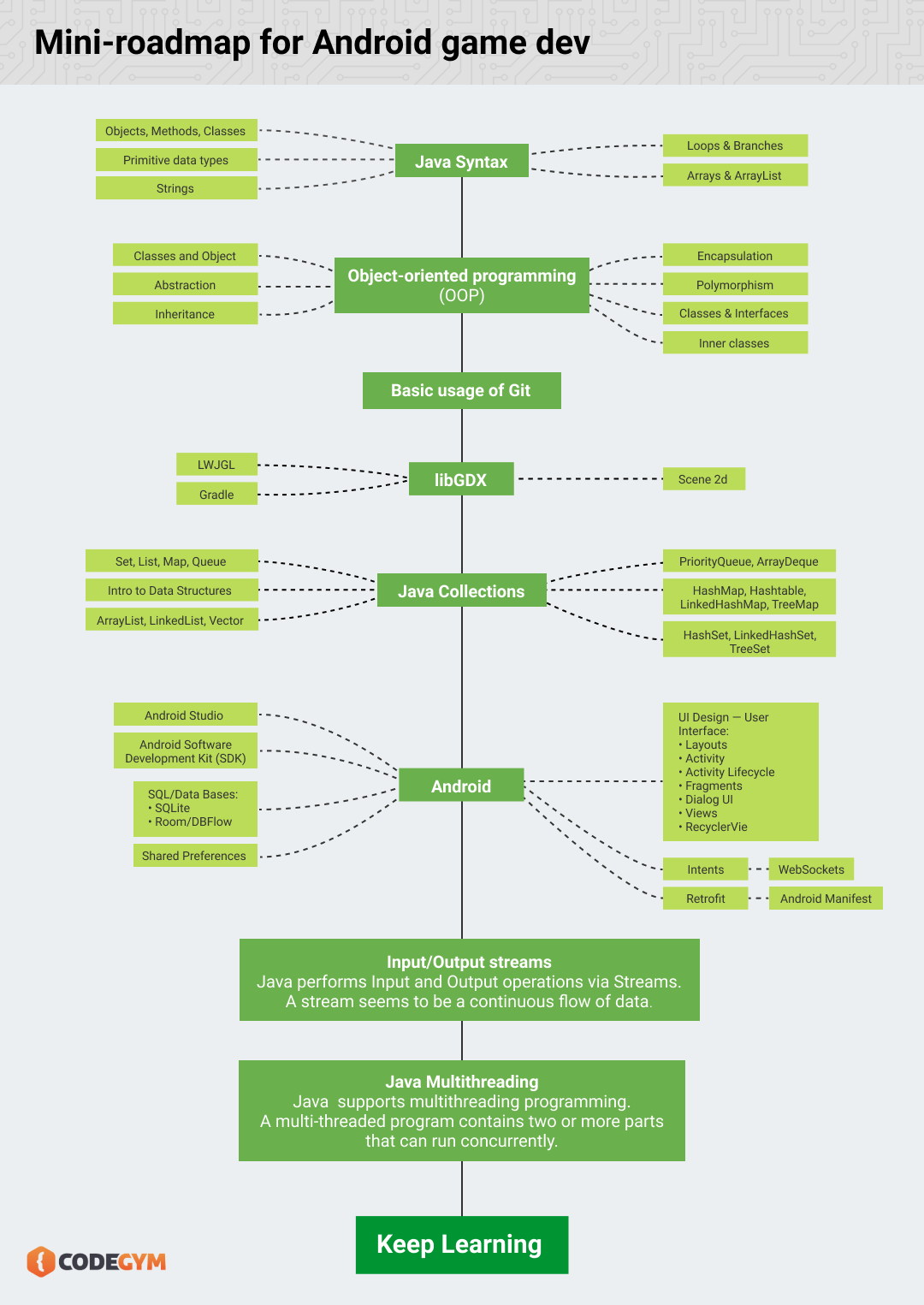 Learn the basics of Android development

Android’s official website is a great learning resource for developers. It has a tutorial that walks you through creating your first Android app.If you already know Java Core, it would be helpful to learn about game components, such as GUI (graphic user interface), game graphics and physics, and sound.

libGDX is a framework for developing cross-platform games. So you can develop one code for different platforms, such as Android, iOS, Windows, Linux, macOS, and Web. It’s written in Java and provides a bunch of great functionality including drawing API’s, sound, asset handling, storage, etc.) for making game development much easier. It has sufficient documentation to get you started. libGDX is based on LWJGL, a library that lets you have access to OpenGL graphics library and contains tools you need to create 2D and 3D games. LWJGL supports cross-platform API for creating music and sound effects OpenAL as well as OpenCL, a standard for cross-platform parallel programming.

Git is the most widely used version-control system for tracking changes in computer files and coordinating work on those files among multiple people. Every professional should know it and GitHub, the largest web service for hosting IT projects and their joint development. Some Indie developers make all the game from scratch, with all graphics, design level maps, textures, sprites of characters, texture atlases, but for your first projects you may use free graphics from different resources. Once you get the hang of Android app development, you can start practicing on making games. The Internet is full of written and video tutorials on making simple games.

There’s no endgame when it comes to being a developer. Technologies progress, users, shift interests and become more demanding, so you need to constantly improve your skills. Just remember to divide your time between researching topics and doing practical exercises, spend more time on practice. 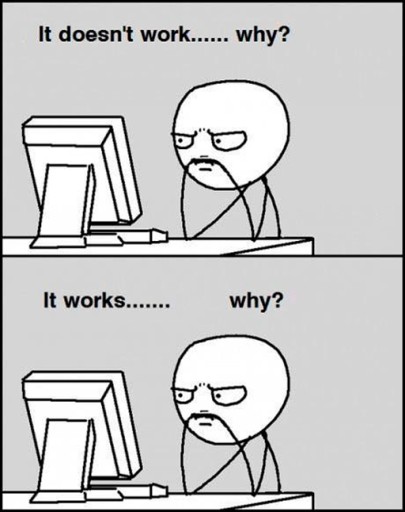 Things to Keep In Mind When Studying Java

Do you remember how babies try to walk, falling down and getting up again and again? The same story with programming, it is a practical activity. It is all about creating applications! Until you practice your concepts you can’t be sure that you know them. And unless you know Java’s basic concepts, you won’t advance to the next level and dabble in the more complex aspects of Java programming. So keep more practice, less theory, especially for your first steps.

Java’s popularity also means that there isn’t a shortage of practice opportunities.

Before you go into Java game development, try out some basic coding exercises: Once you are comfortable with the basics of the Java language, you’ll need to start trying out more complex exercises, such as: Remember to practice every day as you need time to hone your Java programming skills.

Use Every Online Resource at Your Disposal

When self-studying Java programming, you need to look out for everything and anything that’ll help you. Java is a popular programming language, which means that there are a number of forums, video courses and online resources out there. You just need to use them! Java programming forums will help you to immerse yourself in the language. Stack Overflow and Oracle's Java Community are just a couple of examples of the online Java communities you can use to discuss your Java learning experiences with people who are struggling with the same issues that you are and get advice from professionals who have more experience then you do. You can even find video courses and tutorials on YouTube, here are a few of them:

Don’t Forget to Hit Those Books

As much as you need to practice when learning a programming language, Java theory is still important and books are a great source of that. They’re a way of getting the tips, tricks, and Java coding processes straight from the experts. Here are a couple of e-book options that you could try:

It’s easy for beginners to start using Java for game development, once you learn the basics. It just requires a bit of dedication, persistence, and practice. Devise a learning plan, go to online communities, use practical courses, learn theory, and try out video tutorials to help you along the way. Once you get your head around Java you can start looking for Junior game dev positions and internships. And once you do find a job, keep an eye on the latest trends so that you’re always at the top of your game.
Alex Vypirailenko
Java Developer at Toshiba Global Commerce Solutions
Before IT, Alexandr managed to work in various fields and companies: at Guinness World Records, London Olympics 2021, and Nielsen, ... [Read full bio]
Comments (3)
TO VIEW ALL COMMENTS OR TO MAKE A COMMENT,
GO TO FULL VERSION
Amit Gupta Level 0, India
17 August 2021
Thanks for sharing blog on java for game development. As a developer it is very important to understand if the tech will be best suited for client and their business. As a developer I always suggest business to go ahead with java for game development.
Clark Level 17, Berlin, Germany
1 November 2019
Thank you for all the advice, hints and book recommendations.
Shahlan Level 2, Kuala Lumpur, Malaysia
20 October 2019
Great dedication returning something to the public. Only those who are at their own level can reach and doing what you done. Genius will create genius. Thanks for sharing...
This website uses cookies to provide you with personalized service. By using this website, you agree to our use of cookies. If you require more details, please read our Terms and Policy.